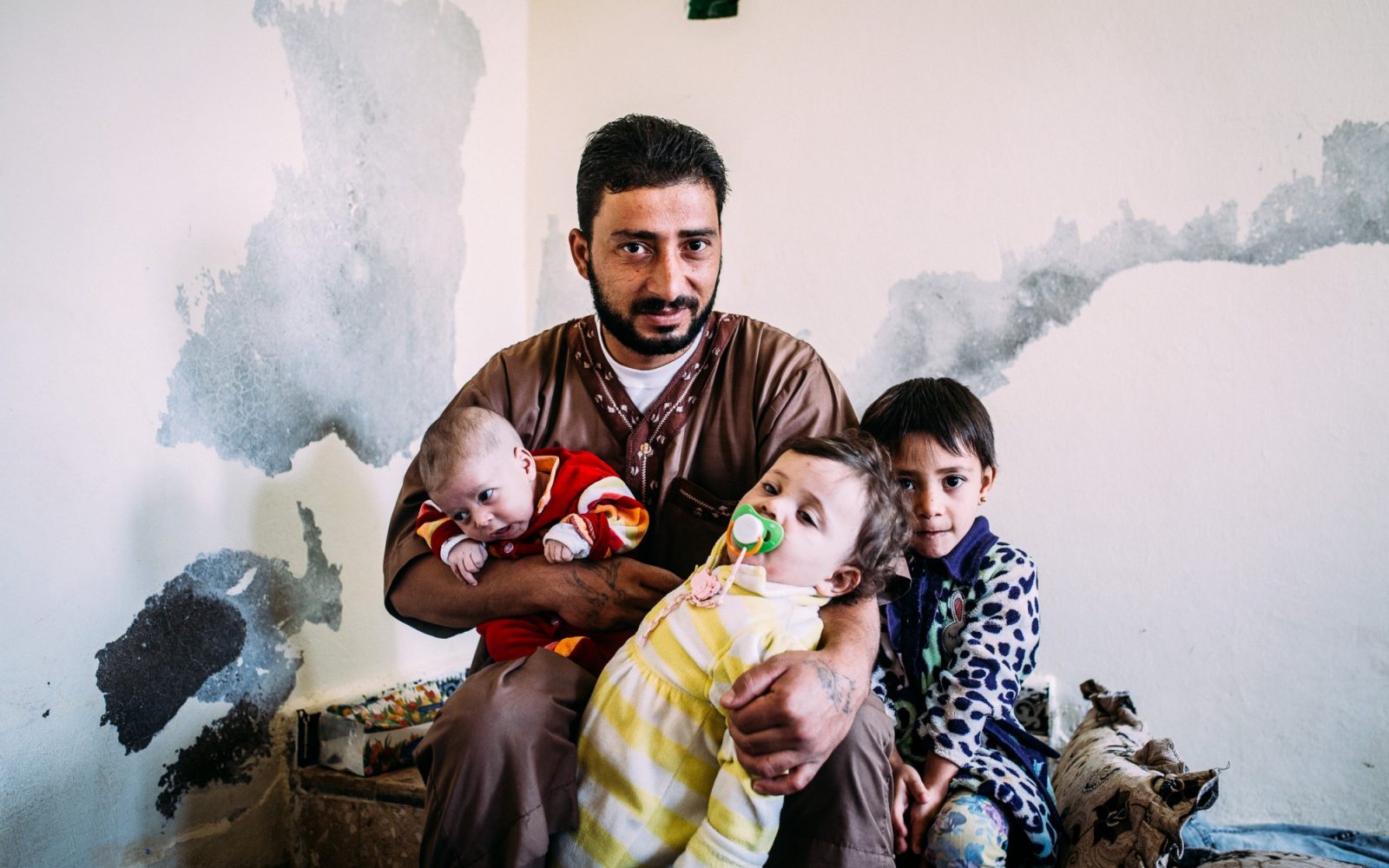 Jussuf is around 34 years old. He’s sitting crossed-leg in front of me and tells his story. He lives near Mafrak for 3 years. Originally he’s from Homs in Syria, the city which got hit by the war the hardest.

He has 4 children, of whom the oldest attends to Vision Hope’s Hope Kindergarten. The pre-school kid is a beautiful little boy with big eyes and unusual light hair. This morning I sang and danced with him and he hugged me spontaneous.

Jussuf tells us that he, as so many others, travelled through the country first to escape the war.

While we are talking his nephew came into the hut. We asked him about his age, but he doesn’t know. Jussuf guesses that he should be around 14 years old. Asking him why he is not attending school, he said the last time he visited school in Syria he attended third grade. Since then he doesn’t go to school anymore.

He needs documents and official permits to attend school, which he doesn’t have, he told us. But maybe he doesn’t want to attend. I ask myself what will he became one day. What would happen if a child dropped out of school after third grade in Germany?

Jussuf doesn’t work. I asked him about his daily routine, he answered: “Getting up, eat, pray, going to bed.” He has a passion for birds of which he takes care. His wife doesn’t work as well. She brings us tea, completely covered, and hides in the house. When asked about how he pays his rent, he answered that he borrows money. The UN only provides food stamps every now and then. He has to obtain the rent of around 50 Dinar (70€) elsewhere. A lot of his family members are still in Syria. His brother is missing. He is sure that the army took him. His mother is also still in Syria; they can only talk when there’s a standing signal.

Jussuf has another daughter in preschool age, but he says she’s sick and therefore can’t go to the kindergarten.

After a few minutes she comes inside and seems to be full of beans and takes a look at my photography bag. She sees the apples and banana inside and gets big eyes. When I gave her the bag of fruits, she didn’t let go of me. While we are talking she is sitting next to me. I assume that the family doesn’t have enough money to send the daughter to preschool.

I feel uncomfortable taking pictures of the house. For the picture his wife hides additionally under the blanket in the bedroom, although she is fully covered anyway.

I try to understand but can’t find the right answer. While driving home I think about the children and start worrying.

A lot of questions are running through my head: why doesn’t the father try to find work? Why isn’t the kid talking at home? How would I behave without an aim?

I remember the words of a psychologist, who’s seminar about how refugees can overcome trauma I attended this summer. He said that people on the run are also prone to depressions. When arriving at a safe place, huge exhaustion spreads.

We can witness this in Germany as well — people who are not attending German classes because they can’t get up for example. In addition, it is emotionally grueling not having a perspective nor the feeling of safety for their family. Maybe that’s the reason, but maybe it’s not.

I took this journey to find answers, but a lot of new questions popped up additionally.

Volunteering in Jordan. Photos and Text © Alea Horst for Vision Hope International.
In October 2016, volunteer Alea visited Jordan. From the field Alea sent us the pictures and the stories we bring now here in this series of ten articles. From the warm welcoming Arab kingdom where 83 in 1000 inhabitants are refugees, this are their stories.