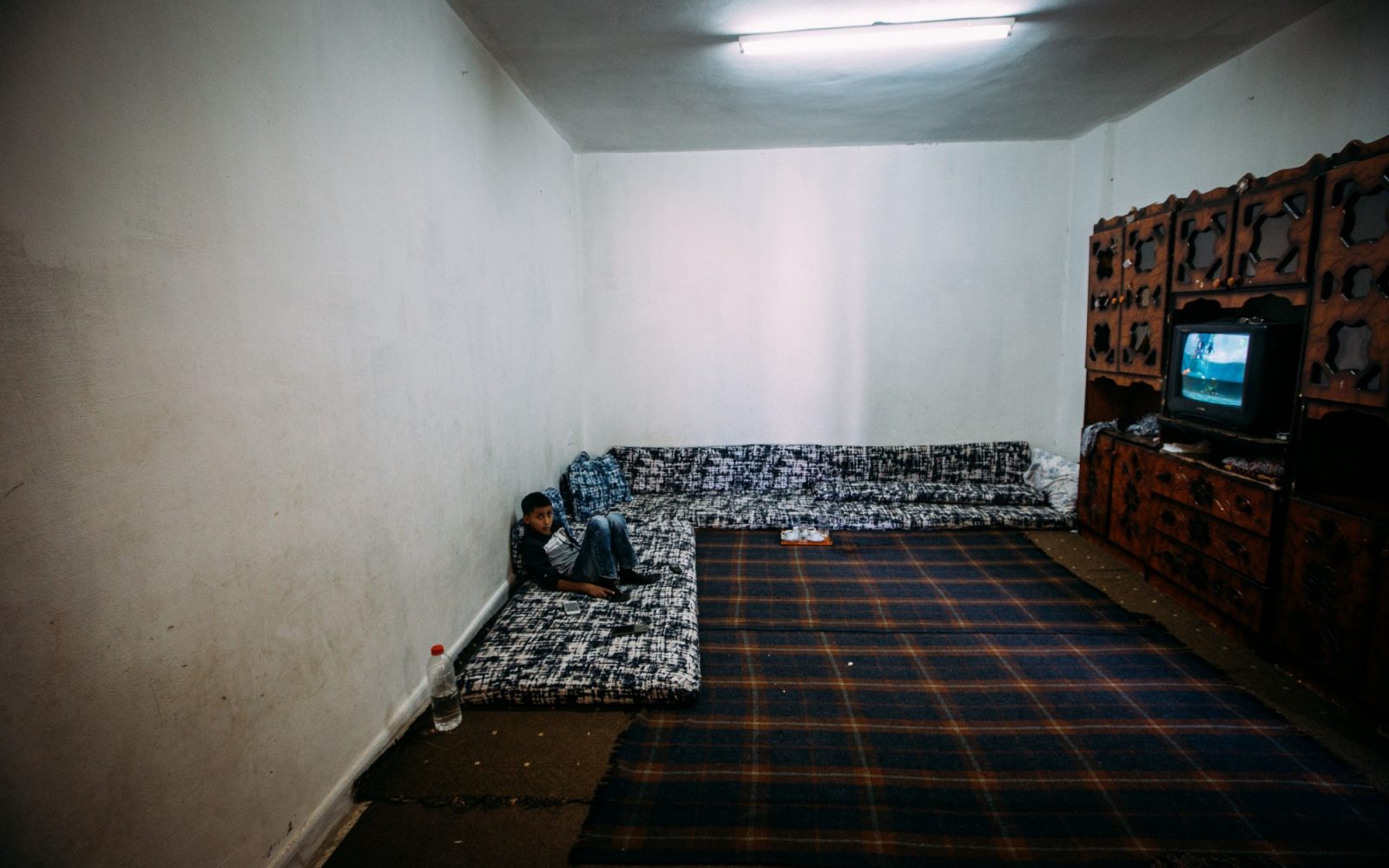 Yara: wishing to go back to Syria.

Yara is 46 years old and comes from Hama, Syria. She has 5 sons and 2 daughters. She is already a grandmother. Her daughter and grandchild are visiting from Amman. She is wearing a hijab (headscarf), but as soon as she sees that we are a group of women only, she undresses and reveals a jogging pant and a comic shirt. Her hair is loosely tied up with strings of gray.

The last couple of interviews went quite similar. When taking pictures, the women put on their headscarf and dresses, but while talking they sit loosely dressed in front of me.

It is hard for me to grasp the transformation from headscarf and dress to comic shirt and loosely fit pants. The pictures are just too different from each other. It is a great experience to witness both sides.

Even though while walking the streets of Karak, I, as a Western woman, often feel foreign, it is great to experience all of it as a woman. Being a man, the women definitely wouldn’t open up as much as they do.

Only half of her children live in Jordan.

Two sons fled to Lebanon and Turkey. Yara lives in Karak for 2,5 years now. When asked about the reasons she fled, she answers: ‘I was afraid for my children.’ Her husband disappeared four years ago. He was out and never came back home. She hasn’t heard from him since that day. She thinks that the military took him away. That’s something that happens quite regularly. ‘They come and take the man, because they need soldiers.’ They just kidnap them, and then they disappear. Yara’s youngest son was not even a year old, when it happened. Yara has to take care of her and her kids by herself.

After she fled Syria, she stayed at Camp Zaatari for a day, but escaped again. The circumstances were unbearable.

In the meantime, one is not allowed to enter and exit Zaatari as one wishes. Because there is no support or work on the streets of Jordan, the government wants to keep the refugees in the camp. Large amounts of money have to be paid in order to be freed. A brother-in-law paid 1000 Jordanian Dinar (around 1300 Euro) so she can leave the camp. Now, she receives support via food stamps from the UN, the rent for the two-bedroom apartment is paid for by her son from Lebanon. She is very sad about the fact that her son has to send her money. She doesn’t receive any other support.

When we told her that the translators and I are from Germany, Norway and the US, her eyes start to glaze. She wants to go to Germany or Canada so badly. She only heard good things about those two countries. Then her son wouldn’t have to pay for her rent and her children would get a good education. But the road via boat is too dangerous. She’s afraid for the life of her children.

Yara’s youngest son is attending the preschool of Vision Hope. He is a shy boy. I observed him before while he was playing. She emphasizes how thankful she is for the kindergarten. And for the bus which picks him up. The road there would otherwise be too long. She wishes for more English lessons there, because she thinks it is of high importance. But her biggest wish is to go back home, to Syria.